1. How did you get into time-lapse? Hyper-lapse?

I’ve worked as a photographer for over 35 years now and in that time I’ve had to adapt and reinvent what I do to suit the changing nature of the market. I was a photojournalist in the 80’s and 90’s working for an International range of Magazines like GEO, Sunday Times, Smithsonian, Time Life, New York Times, and many more.

In 2001 I could see that, despite being in their infancy, digital still cameras offered a unique way of capturing very hi resolution images which could easily be used as individual frames of high definition footage for time-lapse work. So I threw myself into the idea, taught myself the shooting techniques, learned to use the software and pitched my work to the agencies.

I even had to build my own intervalometer.

At first the agencies were hesitant– I was the first person ever to present digital time-lapse to these guys- it was a new idea and they were a bit wary. Eventually I got a contract with ImageBank film (already by then a Getty brand) on the basis of a clip I produced of the Eiffel Tower.

That shot stills sells today and is one of the highest grossing time-lapse clips in the library.

I threw myself into International production of digital time-lapse – mainly based in major cities of the world and my wife and I have produced over 4,000 clips in more cites than we can remember.

My speciality was always smooth day-to-night transitions with fully controlled highlights and shadows. This required a lot of technique innovation both in terms of shooting and After Effects post production. Remember this was back before DSLR’s were mainstream and the sensors were nowhere near as good as today. Raw files were still a thing of the future and bulb ramping hadn’t even been dreamed of.

I am always trying to push technique to the limits and this was one of the reasons I got involved with hyper-lapse. This technique opens up a whole new range of possibilities for time-lapse and can result in a much more dynamic and captivating end result. A lot of people are now producing hyper-lapse material but very few are doing it well. I have developed systems that allow me to make complex multi-point rotational moves through dense crowds with short intervals at the same time as doing a bulb ramped day to night transition and controlling extremes of lighting.

I teach all this in my workshops along with many many other tips and tricks from years of full time time-lapse production. 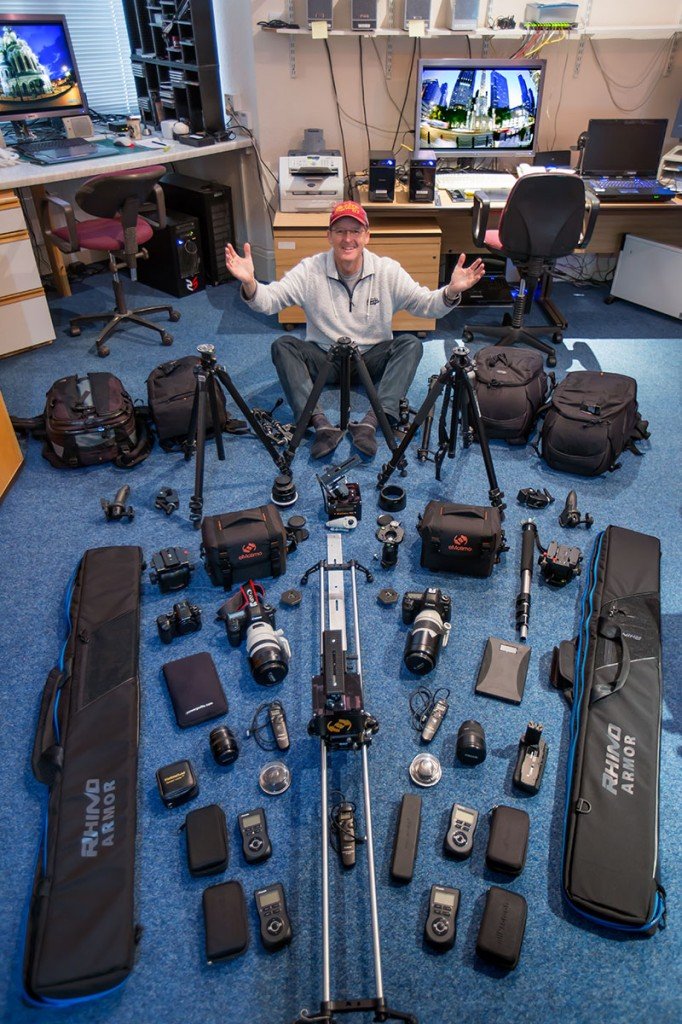 2. How do you plan and then shoot a time-lapse?

When planning a city based project we spend a lot of time looking at images and videos that have already been produced from that location to get an idea of what is already out there. We then go to Google earth and try to get a feel for where the best locations, rooftops, angles are likely to be.

We then try to find out if there are any live web cams in any of the areas we want to shoot – Google earth is always out of date so you never really know what the scene is going to look like until you get there. Webcams are a good way to see if any construction is in progress – scaffolding etc can ruin your plans very easily.

Based on that research we approach specific hotels and locations where we would like to shoot from and see if rooftop access is a possibility. We often change hotels many times within a one week visit in order to get access permission to rooftops for day to night transition shots.

Once on location we make a city tour and visit the locations we want to shoot from and make preliminary assessment of what we are going to shoot. For hyper-lapse moves this means walking the route and working out the pacing, timing, pivot points and obstructions.

We try to visit every day to night location in advance at night to see where the lights are. It is very easy to start a shot only to have it blown by a spot light you hadn’t noticed in the day.

We also scout locations that are immune from the weather – shopping malls, museums, aquariums etc and save those shots for the bad weather days.

We work pretty well flat out rain or shine. Cities at night in the rain are often much more beautiful than in the day. Last time we shot in Dubai last we produced over 200 clips in ten days.

3. What was the most difficult shoot you’ve experienced?

Technically I think one of the most complex shots we’ve pulled off was the hyper-lapse twilight traverse through a densely packed Times Square in New York.

The extremes of lighting from the brighter than daylight video screens to the darkness of the crowd on the street meant I had to shoot each position of the hyper-lapse four times to produce enough exposure options for later assembly into a balanced shot. This had to be done in changing late from early evening to late evening and whilst moving through the densest crowd imaginable.

The post production on this shot involved tracking the motion of the screens and Neon signs and applying the tracking to masks enabling insertion of the correct exposures into those parts of the scene. This type of scene cannot be handled by conventional HDR software assembly as that method produce all sorts of ghosting artifacts in complex scenes such as this. You can see the scene I am referring to in my ‘Moving Through New York’ video.

On a completely different tack the animated mask work on ‘Chicago Tocatta & Fugue’ was also quite challenging as the beats in that piece of music are very close together and the timing is very difficult to do accurately.

4. Tell us about a dream project you haven’t done?

I think for me the next project is always a dream project as I don’t really take on the project unless its something I really wan’t to do. I have been working on some new techniques for a while now in order to be able to bring something special to my follow-on video to ‘The Lake’ it will be called ‘The Forest’ – I am looking forward to getting the time to start shooting that project this year.

I had been using a much heavier much more costly motion control rig for years before I moved over to working with the eMotimo TB3. My attention was drawn to eMotimo when I won a TB3 as first prize in the ‘Chronos Film Festival’.

I fell in love with it quite quickly as it was so much lighter and easier to program than the rig I had been using. Another thing I really like about the eMotimo is that it interfaces really well with the Promote control via its external triggering facility. This makes it much easier to control day to night ramping motion control moves by letting the Promote Control decide when to move the eMotimo. I didn’t have this capability with my former system.

I also like the way it integrates with sliders like the excellent Rhino Camera Gear sliders I use. 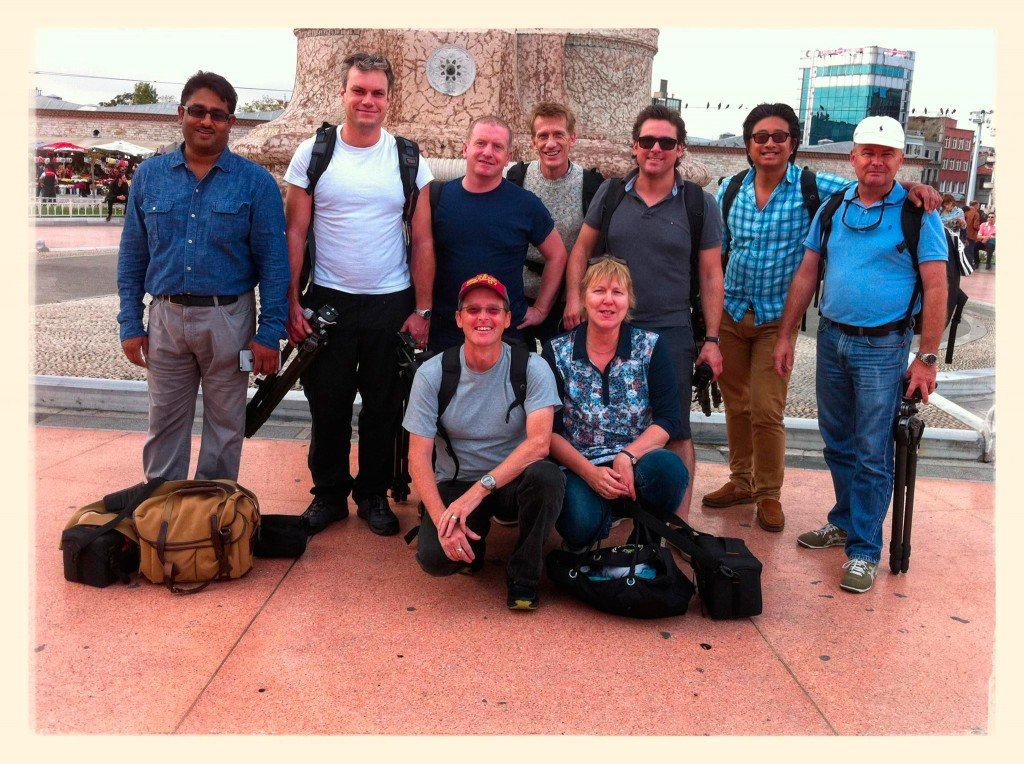 6. We know you teach time-lapse and hyper lapse techniques. Do you have any classes coming up?

Oh yes – the last one in Istanbul was a great time – you can see a video of the event as well as interviews with the students on the workshop pages on my website.

We will be holding workshops in New York, Venice, and Istanbul next year and the dates and prices are on my website as well. http://www.geofftompkinson.com/workshops

New York will be the first one this year and the early bird discount offer closes at the end of this month – so anyone interested should consider signing up now. We had to turn away many people for the last event as they left booking until after we were full. We only take 8-10 people on these courses as they are quite intense and involve a lot of hands-on support.

Attendees also get a range of discount opportunities for equipment used on the workshops, on-line access to over 6 hours of After Effects Post Production training videos as well as membership of an invitation only Facebook group for ongoing discussions and problem solving.

Most of the last group will be coming on an advanced follow-on course based in Austria where we push the understanding and application of techniques in After Effects as well as shooting some of the scenes from my video ‘The Lake’.